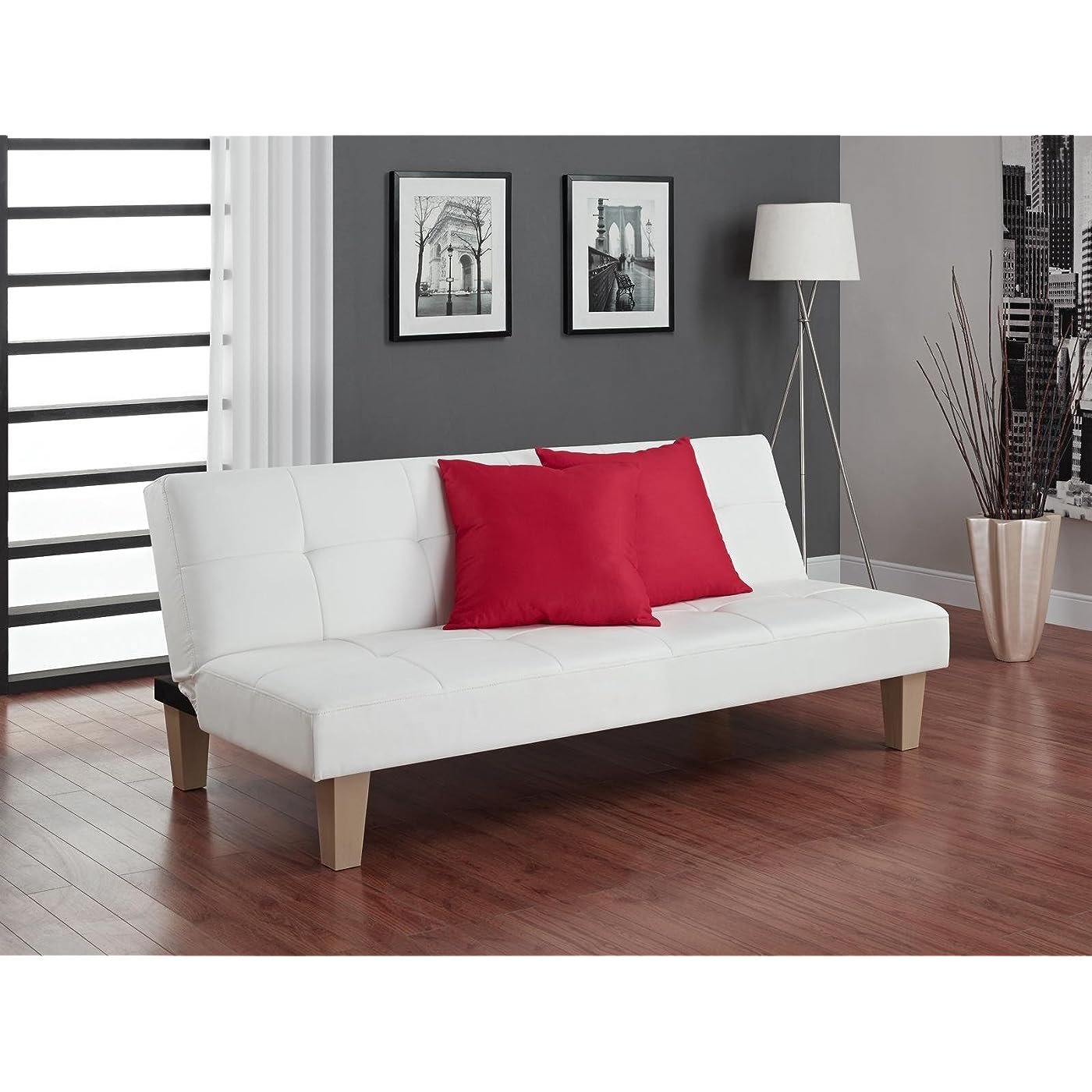 Checking for product changes
$301.43 Why this price?

As low as $25 / mo
Learn more
Free shipping on this product
Availability: Only 5 left in stock, order soon!
Fulfilled by Simply Eezy
Arrives Feb 4 – Feb 7
Order within 20 hours and 57 minutes

Sturdy, durable and chic, DHP's Aria Futon Sofa bed is a perfect choice looking for a small futon to fit in tight spaces. The Aria futon has faux leather upholstery that is easy to clean with only a wipe down of a damp cloth. With its sleek, chic and modern appearance, the Aria Futon fits perfectly with most room decors.

If you place your order now, the estimated arrival date for this product is: Feb 4 – Feb 7
Yes, absolutely! You may return this product for a full refund within 30 days of receiving it.

4.0 out of 5 stars | Very sturdy, nice looking
A decent deal for the price. Futon was exactly as advertised. It was very easy to assemble once out of the box - it literally takes about 5 minutes and includes removing the legs from the hidden compartment and attaching them to the bottom of the futon. Comfort wise it is pretty decent. It is definitely suited for those who prefer a firmer rest. This also negates the issue found in many futons near the center where the frame can be felt when weight is applied - that is not an issue here. The main thing I would advise the buyer to be aware of is the dimensions. It was slightly smaller than I had expected - but that was only due to myself not looking at the size. Laid out flat it has a width of 69" - or 5'9" from head to bottom. This means it would fully accommodate a child or average sized adult woman - though you may hang off of it a bit if you are on the tall side. I am just over 6'0" and this futon would probably be just at the limit of how much overhang I would want on any piece I might potentially sleep on. Though it is largely personal preference I would not recommend it as a sleeper to anyone over 6'1'' - we're talking 4 inches plus hanging off the edge of the futon. My only actual gripe came with the packaging - which was damaged - and there was a small black mark on the couch that looked like the dirt typical on the floors of shipping semis. Thankfully the faux leather on this piece is very easy to wipe and clean.
3.0 out of 5 stars | This futon looks beautiful is comfortable to sit on but not for an ...
This futon looks beautiful is comfortable to sit on but not for an adult to sleep on I slept on it for four nights when I had out of town guests and I might have well slept on the floor. Had it been comfortable I definitely would have kept it because it is a very beautiful futon. It is very low to the ground which is fine for children but hard for adults to get up and down. Easy to assemble. Impressed with paid return shipping by vendor and refund.
5.0 out of 5 stars | What an easy process! And especially for the price
This arrived almost completely assembled. All you have to do is screw on the four legs and unfold it. Bam, instant futon. What an easy process! And especially for the price, it's really nice looking. One teeny-tiny gripe I do have is that the legs are plastic, faux wood..and they do look plastic. It's fairly firm, so if a guest was going to sleep on it, you'd need padding. As a couch it's perfect. It has a low profile and doesn't take up much space, perfect for if you'd like to have a couple of couches in the same room or if you have a small apartment (or for a kids room or playroom!). I'm pretty impressed with this thing.
4.0 out of 5 stars | it's really great, haven't seen anything better anywhere else - for ...
for what it costs, it's really great, haven't seen anything better anywhere else - for that prize. the seating surface is pretty small though, so you won't be sitting on this for an hour, you're like to slide sideways and go into "lying mode". but it's very convenient, especially if you have a small place, or you move around a lot and thus don't want to spend money on something fancy. folds open in 3 seconds. and the "faux leather" is convenient. it's not gonna fool anyone into thinking it's real leather. but it doesn't look bad and it's easy to clean. again, for the prize great. if you wanna spend 30 bucks more, get another one that's a liiitle bit bigger. (it's long enough though! two people can sit very comfortable next to each other, could even squeeze in a third person)
5.0 out of 5 stars | A Very Good Choice For A Small Apartment.
I bought this futon after seeing that the futon I actually wanted came with $140 shipping and handling. But, I think this one might have been the better choice all along. The cushion is firm, the upholstery feels very buttery and seems much more expensive than it actually was. I've been sleeping on it since I got it, as it's a replacement for an air mattress in a very small studio. Pros: Very nicely designed, looks very nice. Easy to put together. Very comfortable to sleep on (I'm about 5', keep that in mind). Easy to keep clean. Cons: When laid completely flat, there's a groove down the middle that could be uncomfortable. It's very low to the ground. Ultimately, I'm really happy I went with this one instead of paying the shipping and handling on the other one. Update: I've had this futon for a few years now, and it's shown minimal wear and tear. I'm very happy with how it's stood up to time. I no longer sleep on it, as I now have a 1 bedroom apartment and have a bed. It's now solely used for sitting in front of the TV! Unfortunately, my new cat has decided to pee on it several times, which has discolored it. And it needed to be thrown away. I'm debating on whether I should get a new one and have it face the same fate...