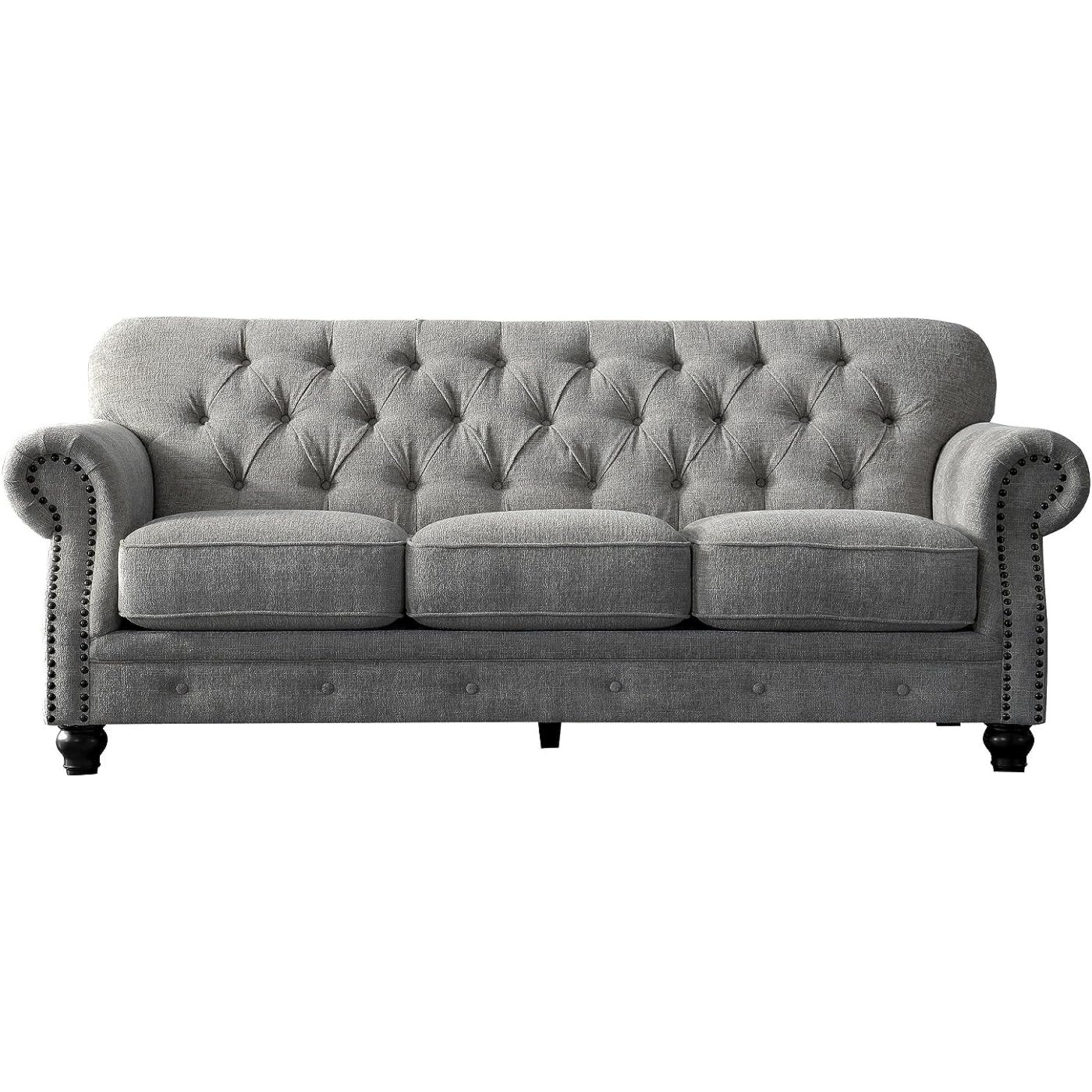 Free shipping on this product
Availability: Only 2 left in stock, order soon!
Fulfilled by Amazon
Arrives Sunday, Jan 23
Order within 17 hours and 34 minutes

5.0 out of 5 stars | Wonderful comfy couch, and great service
Size: 67"W Loveseat Color: Light Grey
I bought this couch for its aesthetics and because it looked comfortable, and it delivered on both counts. I knew it was risky to buy a couch just based on a picture, but it's incredibly soft and comfortable, with thick, springy cushions, and in person it looks very attractive and well-made. It wasn't mentioned in the listing, but it even came with two nice big pillows in a brown faux (I hope) suede covering. There was a problem with the color I wanted being out of stock after I placed my order, but a very friendly and helpful rep contacted me by text to notify me about and resolve the issue. I ended up accidentally getting shipped a different color (almond instead of gray), but it still looks great and the rep proactively offered me a substantial discount for the mix-up if I decided to keep it. I'm very happy with both the couch I ended up with and the way the service was handled. Even the delivery service went above and beyond to navigate the pretty hefty piece up a narrow stairway to a fourth-floor walk-up with great professionalism.
1.0 out of 5 stars | Doesn’t last
Size: 91"W Couch Color: Light Grey
Initially I loved this couch, but after about 2 months the fabric looked like I’d owned it 2 years, and after 5 months it now looks like it needs replaced it’s so worn, ratty and frayed... also the cushions have lost their support. The several years old couches I replaced with these looked in better condition. This was a very expensive mistake x 2.
1.0 out of 5 stars | Save your money!!!
Size: 91"W Couch Color: Almond
I literally hate this sofa. First of all, I had issues with the delivery of this sofa and kept getting the runaround with the delivery of the sofa. Once received, it was damaged. Called to report the damage, and they agreed to send another one however, I would need to return the sofa in order to get a refund, then repurchase another one. Eventually, I received the new sofa after a hassle with the delivery department. This sofa is a completely different color than the loveseat that I ordered when initially making the purchase. The back of the sofa is very hard an uncomfortable. The seat cushions are deflated and uncomfortable, which makes my back problems worse. The loveseat are getting lint balls every and the cushions are overfilled. The loveseat is also a lighter color of the sofa, although both description of the color stated almond. This set wasn't cheap I paid nearly $2400 for the two pieces and now I cannot stand the look of them. I hate them and wish that I had never bought them. I want my money back due to the hassle and false descriptions, the set doesn't even match. Seems like I've had them for 2 years vs almost 2 months.
5.0 out of 5 stars | Wrong color, but beautiful piece of furniture
Size: 67"W Loveseat Color: Light Grey
Beautiful piece of furniture, but i received lt brown instead of gray. The tag on the piece said it was gray, but not even close. After all the work it took to get it thru the doors of my 143 year old house, I guess I’ll keep it. It does match the mantle of the fireplace.....
4.0 out of 5 stars | Nice Sofa
Size: 91"W Couch Color: Light Grey
Well it’s really nice but it just seems like the seat depth is too short and too high for me And I’m short so my feet don’t touch the ground sitting on it. I wish I could push the cushion in a little more too.
5.0 out of 5 stars | IT IS BEAUTIFUL.
Size: 91"W Couch Color: Almond
IT IS VERY LARGE TO FIT THROUGH THE FRONT DOOR. BE SURE TO MEASURE THE WIDTH.