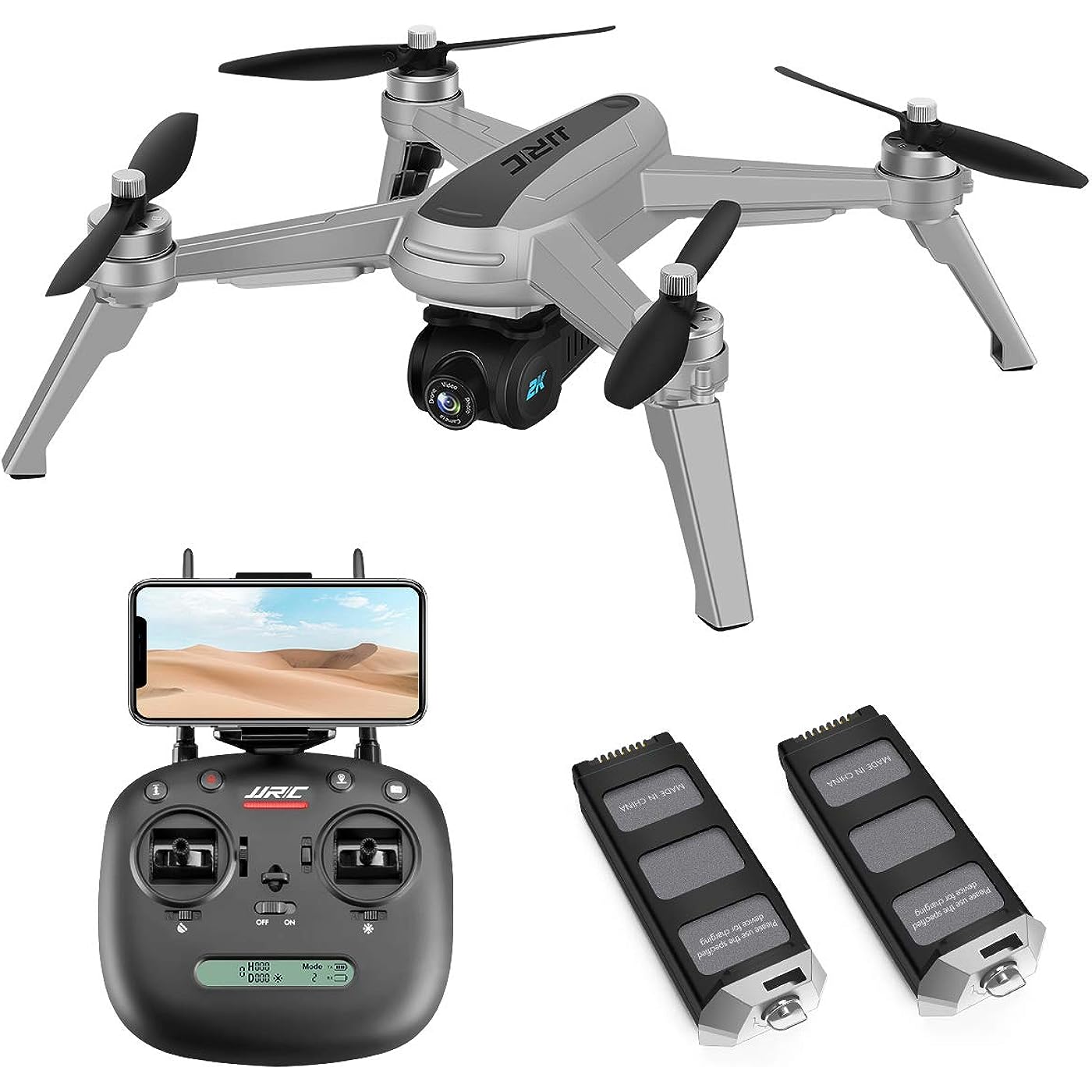 Specification Brand name: JJRC X5Camera: 2K FHD 90 Degree AdjustableLithium Battery:7.6V 2420mAhRC Distance : 980-1640ft5G Wifi image transmission distance:656-980ft40MINS Flight time:20+20 mins (2 batteries)Charging time: About 3-4hQuad's Size:13.8 x 13.8 x 3.7in5G WiFi Real-Time Transmission system for a faster and clearer photos.Brushless motor for a low noise, smooth running, powerful flight and long service life.GPS Smart Return to Home:GPS mode ensures a full control to the drone when in further distance. It is able to provide with automatic return about low voltage return and no signal return.Keeps the drone safe flight.Point of interesting flight: the drone automatically circles around the hot point, elevating the flight experience.Smart follow me mode: Lock you as the object, then fly following you automatically without control,continually capture their actions and activities. Advanced Equipment Brushless Motor Advanced 2204 1500KV brushless motors provides you a more Quiet and Powerful flight in high speed(Max 45km/h),which makes your flight enjoyable.The upgraded quick-release propellers run with higher efficiency. Tips: Please stay away from spinning propellers in case of any accident. Modular Battery-20+20mins Flight Time The High-capacity 7.6V 2420mAh intelligent battery provides up to 20mins flight time each, and we have 2 batteries in this set so it will be 20+20mins in total. Longer flight time supports you and your family obtain more exciting and interesting.What’s more,When the drone is in low power, the light of the quadcopter will flash to warn. You can immerse yourself in a substantial flight. 90°Adjustable 2K Camera The upgraded 2K HD Wifi Camera (20481152P) with 120°wide-angle provides 2K video footage in sharp quality. Also the camera angle can be adjusted up to 0-90° degrees by remote controller,allows you to shoot more angles of sight. Note: 2K content requires a 4-16GB SD card(SD Card not included). Function Intelligent Flight 5G Wifi FPV Transmission Upgraded 5GHz wifi connection from the camera provides farther and more stable live video feed to cellphone through corresponding APP.The image and video transmission distance is up to 300m(980ft), meaning you can enjoy the fabulous scenery real-time transmission 300m away.Perfect for photographing. Note - Please make sure your smartphone supports 5 GHz frequency bands (802.11a/ac/n). Auto Circling (Point of Interest) When Point of Interest fuction is activated, the drone starts circling around the point where the pilot activated, and keep its camera pointing to the location. The radius of circle can be adjusted to 4-20 meters,which can elevate the flight experience. Custom Flight Path In corresponding APP, you can use Tapfly function to set maximum 3 points on map, the drone will fly straightly to each point in order, and hovers at the last point. GPS Auto Return-To-Home Advanced GPS module provides accurate positioning and failsafe fuction of Return-To- Home(RTH), the drone automatically returns to pre-set home point when RC signal is weak/drone battery low. Also you can instruct RTH function by pressing One-Key-Return button.GPS mode provides safer fligh One Key Take-off / Landing Take control quickly and easily with One Key Take-off and Landing function, perfect for beginners. GPS Follow me Follow me mode under GPS positioning make the drone always follow your steps and point the camera to you to catch your every move and take aerial photos.Free your hands to take photos or videos! EPIK Drone with Camera 40Mins Flight Time Drone with 1080P Rc Mini Drone for Kids Playing Time 40mins 20+20mins 7+7mins Battery 7.6V 2420mAh 2 3.7V 1800mAh 2 3.7V 300mAh 2 FPV Distance 656-980ft 164ft Control Distance 980-1640ft 262ft 65ft Pixel 2K 1080P 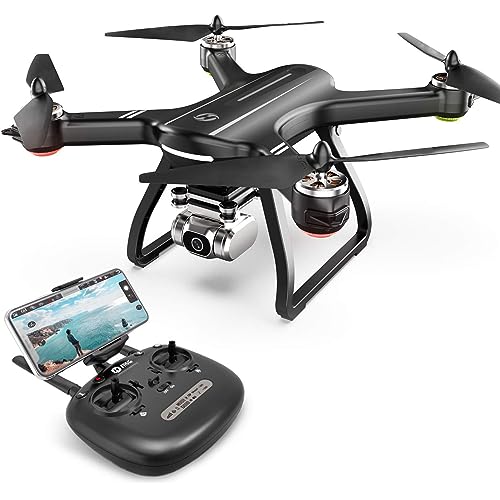 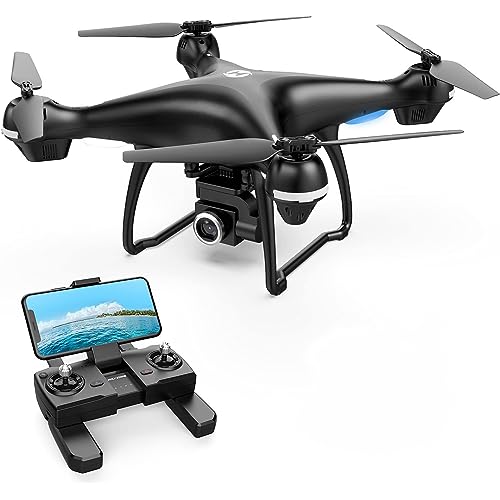 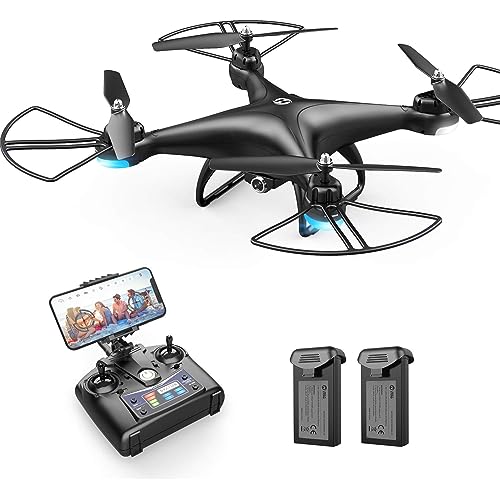 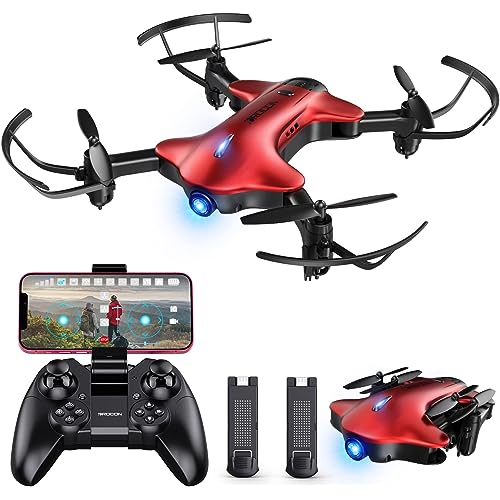 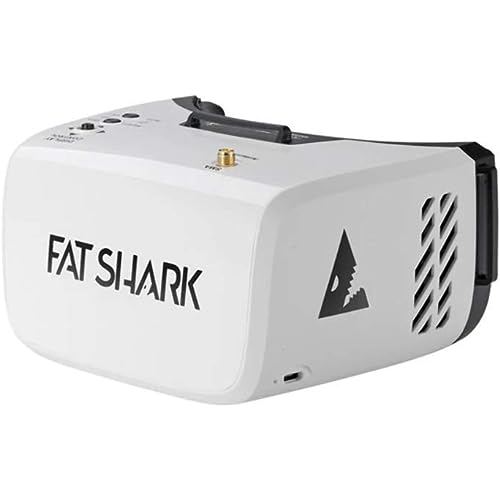 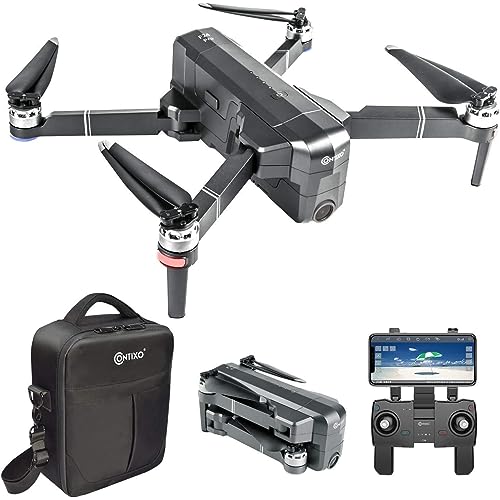 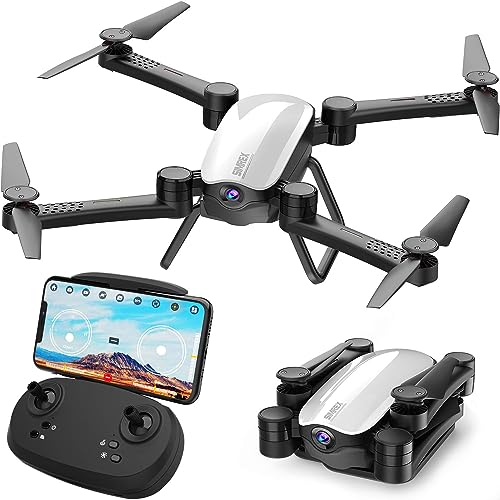 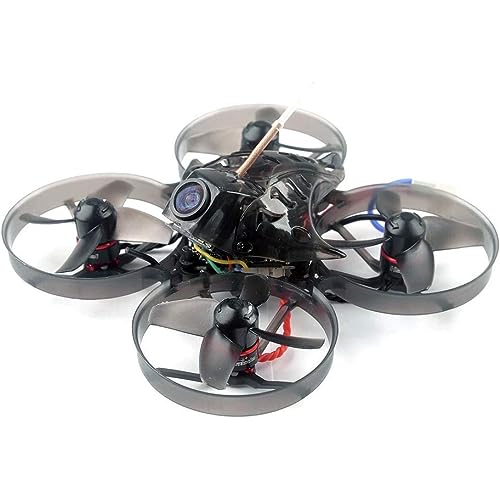 5.0 out of 5 stars | Good quality advanced drone
Color: Gray
The media could not be loaded. I had this drone from Amazon for about two months. This drone embedded with so many great feature in it . This is my fifth drone I had and this drone is NOT a entry level drone for beginner. Before I used it, I had to calibrate it up following the quick guide. The drone is control by RC remote and phone 's app. I can use app to monitor drone's distance ,attitude ,battery and signal. I can also use app to take high quality pic and video. It can be store in drone's SD card or store in phone memory. This drone can be fight up to 300 m high and I only fight about 70 m height in the park. The fight time is about 15 mins and very stable in good weather condition. The GPS feature can easily make my drone return to starting point, especially when the battery running out or out of signal. The follow me mode is pretty impressed me because I can shoot awesome video by my self. If provide extra battery, that will make me more satisfied about it. Highly recommended.
5.0 out of 5 stars | You won't be disappointed, a nice quality feel and it works great!!!
Color: Gray
I purchased this jjrc x5 epic after a week of watching video and reading reviews. I'm a 1st time drone buyer and wasnt sure what I was getting into. It flew great right out of the box and I was very impressed with how smooth and quiet it was. As soon as I lifted it off the ground and it hovered there right In front of me, I knew I had not made a mistake. I flew it around the yard, took some pictures and couldn't have been happier. With the GPS and headless mode it couldn't have been easier.
5.0 out of 5 stars | Takes a beating and keeps on going
Color: Gray
This is the first droneI ever owned or have flown. I watched a video on YouTube, charged it up and flew it. Now that being said, I did crash it flying at night, which was my own ignorant fault, beer was involved. But, by flight 10. I had that mastered as well. Even though I had crashed it into the trees and it fell in a yard where they had dogs, yep, the person brought it back to me. It had 2 legs and the battery missing along with chew marks on the blades and remaining legs, I put another battery and flew it like that. I will post a video of it as soon as I can. Amazingly it flew good. I didn’t even change the props. Now, it wants to drift a little while hovering, that’s because it has the same chewed up prop. I like it so much I bought another one to use correctly. Drone #1 was crashed at least 5 more times and brought back to me by people I didn’t even know an it’s still going strong. It’s like the Eveready Bunny I highly recommend this drone. It’s quite and the pics are awesome
5.0 out of 5 stars | Very nice drone
Color: Gray
I got to say it's a very good drone if you got enough operation skill. I already own a drone, but it's a basic version, no matter in image quality or functions. Then I got this one, it's totally different, the former one looks more like a toy, this one is more professional. This drone is more difficult to operate that my old one, I took about 2 days till I can finally control normally by myself, with a friends' help, haha. The brushless motors are more silent to fly, the adjustable camera angle is quite useful too because you don't need to control your drone up and down to get the video you need, and 1080p videos can meet most of the needs. The "follow me mode" makes it a more professional tools for vlogger. If you looking for a good drone to help you with your videos, you can try this one.
5.0 out of 5 stars | Great Drone and Great Price
Color: Gray
I bought this Drone as a gift to my brother. He absolutely loves it. It's very easy to use and takes awesome pictures and videos. I attached some pictures my brother took. The camera rotates 90 degrees giving you flexibilty when taking pictures so you don't always have to change direction of the drone to get pictures. It's very eays to fly and gets pretty high up in a very short time. Both my sister and I have flown it and keep trying out new ways to use the fun features like the follow-me feature. My 2 year nephew gets a kick out of the follow-me feature when my brother uses it and tells him that the drone is chasing him. My sister and I have figured out that you can take some pretty creative selfies with it too. It's pretty stable and when you hover so at the right distance you can take a lot fun selfies. There are many great features but I would say the feature I personally like the most is Return Home feature. My brother is pretty good about not losing sight of the drone when he flies it but me not so much. I thought I had lost it because I didn't see it and panicked. Fortunately my brother was there and showed me how to use the Return Home feature. It comes back pretty fast. I would definetly recommend this drone to anyone whose thinking about purchasing a drone. My brother and I are beginners and have truly enjoyed it. In addition to a great product the customer service is top notch. I had a couple of questions about the drone and emailed customer service and to my surprise received a response in less than 24 hours. I made the right choice choosing this drone. Patrice AKA very Happy Customer!